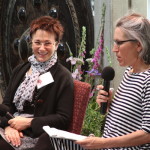 Vortext in Context: Writers Gather for the Hedgebrook Experience

I sat beneath the vaulted ceiling of the Whidbey Institute’s Thomas Berry Hall, staring at the schedule for Hedgebrook’s third annual “Vortext” event, a group of women convening to discuss the art and craft of writing. The schedule was ambitious, each of the three days containing keynotes speeches, panel discussions, workshops, open mics and receptions—all held in a context of “radical hospitality” designed to offer writers the kind of nurturance that supports creativity.

Around me, the 42 participants were finding seats for the first keynote of the first morning. While some writers met each other for the first time and others reunited after a year’s separation, I busily nursed a private worry: how to summarize Vortext for Whidbey Life Magazine readers. As a reporter, I was daunted. As a creative writer, I was doubly daunted.

I confided my anxiety to Hedgebrook founder Nancy Nordhoff.

“How can I possibly do justice to Vortext? Distill the wisdom and advice of so many accomplished authors? Convey the sense of camaraderie? Find and describe the most important themes? All in less than a thousand words?”

“Fun. Power. Community. Those are the themes.” She shrugged, as if it really was simple.

Nordhoff has a talent for making the impossible seem possible and, using a few well-chosen words, she undaunted me.

Fun. Power. Community. What did the six keynote speakers have to say about those themes? And how did the setting and staff reinforce them? Over the next three days, I would find out.

In Search of Fun

As well as writing riveting books (“A Map of the World,” “The Book of Ruth”), Jane Hamilton happens to possess a riotous sense of humor. Using raucous voices and rollicking gestures, she described a search for her Scottish roots that began at the age of 21 when she apprenticed herself to a matronly Scottish weaver with supremely rigorous standards. Hamilton—lonely and isolated in a Highland croft—spent the first weeks scraping lichen off rocks to color the authentic dyes used by the taciturn weaver. While describing her own loneliness and sense of displacement, Hamilton turned Whidbey Institute’s stage into a version of Scotland, adeptly recreating the wind-swept nature of the place, the wind-swept nature of the people and what she discovered about her own wind-swept self. In front of her audience, Hamilton became what every writer aims to be—a storyteller evoking a time, a place and a purpose—while being highly entertaining, original and authentic.

Karen Joy Fowler (“We Are All Completely Beside Ourselves,” “The Jane Austen Book Club”) made a decision to be a writer on her 30th birthday, knowing that making her work public would expose her to criticism. She credits much of what she knows about writing to her long-standing membership in a writing group: “I learned how to read, I learned how to critique, and eventually I was able to apply those things to my own writing.” True to her middle name, she spoke about the importance of joy in the writing process. “When you become a writer, there are many things that can make you not like it. If you’re not taking joy in it, figure out what you need to do to restore joy and do it.” Fowler’s deadpan delivery of comic lines, one after another, caused her audience to erupt in continuous laughter. “Of all the ways I have seen writers fail, not writing is at the top.”

In Search of Power

When petite powerhouse Elizabeth George (the Inspector Lynley series) took the stage, she began by describing her upbringing “during a time when the Nazi holocaust was not too far behind us and nuclear peril not too far ahead.” Author of 18 popular crime novels, George is expert at writing about the darker aspects of human nature, finding her subject matter deep in the shadowy realms of the human psyche.

Subjected to a sin-obsessed religion and separated from an exuberant extended family, George began writing as a way to cope with it all as well as to escape the “expectations of sweetness” typical for a young girl. It was in writing she discovered a “lightness of spirit”—and subsequently parlayed her personal shadows into an art form that continues to fascinate her many fans. “We do not escape our past so much as learn to understand it—and burst from it renewed.”

Ruth Ozeki (“A Tale for the Time Being,” “My Year of Meats”) counsels writers to be patient while they struggle to bring forth their work. “Practicing patience is one of the most revolutionary things you can do.” However, she also identifies impatience as the force that “gets books written.” According to Ozeki, “the tension of opposites is profoundly generative.” Ozeki described her love/hate relationship to her recent award-winning book: “The more I wrote, the more confused I became. The more I struggled, the worse it got.” She put the manuscript aside several times, but always picked it up again. The story-she-couldn’t-write almost drove her to give up writing novels altogether. A residency at Hedgebrook provided her with what she needed to achieve clarity and finish the book.

In Search of Community

Gail Tsukiyama (“Women of the Silk,” “The Language of Threads”) posed the question of what it means to be successful as a writer. “For most writers, success equals solvency.” For those who labor in solitude for years at a time, traditional notions of success are often disempowering. Tsukiyama measures success for herself by the yardstick of certain moments: holding her first published book in her hands, giving a reading of her second book and spotting her high school teachers in the second row.

To Tsukiyama, success is “freedom from expectations.” She finds “grit” to be the greatest predictor of success. To illustrate the integrity and wisdom in stepping outside the fray, she shared a parable about a Japanese painter: he declines to climb the mountain; only by standing at its base can he truly see it.

Carole DeSanti (“The Unruly Passions of Eugenie R.”) is a champion of women’s fiction in the world of publishing. Unpublished writers are always looking for tips on how to navigate the publishing industry, and this audience leaned in close to gather DeSanti’s wisdom. “Questions about the publishing industry are unanswerable. It’s not a business where rules work very well, and they might or might not apply to you or your project.”

DeSanti’s observation that “our very questions are based in our own inner dramas, personal mythologies and ideas about having authority conferred upon us” had many nodding in agreement. DeSanti traced the history of an industry that does not seem especially woman friendly. “Our current definition of copyright has never been a perfect fit for women.” She encouraged the unpublished authors in the audience to “think in terms of friendships and affiliations more than platforms and marketing plans.” Her final words brought the audience to their feet: “Remember that the publishing world is Oz; it is not home. “This is home.”

I counted myself one lucky girl reporter to have encountered Nancy Nordhoff when I did.

To learn more about Vortext and Hedgebrook visit Hedgebrook.org.
To find recipes for the meals served at Vortext, order the Hedgebrook cookbook.
For a complete list of works by each author, please visit their respective websites.