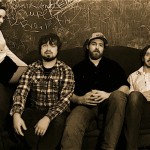 The last concert in the 2014 Local Artist Series at Whidbey Island Center for the Arts begins at 7:30 p.m. this Saturday, March 22. The Weatherside Whiskey Band has the honor of closing out this year’s series of shows and features Whidbey-grown guitarist and singer Tanner McInerney.

“Performing in a theater like WICA is a great opportunity for us to play some of our softer, more vocally driven tunes,” said McInerney.

The group is known for belting out a rocking, roadhouse repertoire of alt-country and bluegrass, buoyed by three-part harmonies and the hot lead picking of Jakob Singer and driving bass lines of Jacob Yackshaw. Amy Meyer rounds out the group’s sound with her fine vocals and sweet, country-styled harmonies. A bonus for the audience at WICA will be the addition to the line-up of ace fiddler Josh Rabies, formerly of the Portland group Water Tower.

McInerney said the WICA performance will also showcase the band’s new direction toward a more string-based sound. The group has dropped the drums and is gradually phasing in some mandolin picking by Meyers.

Not long after forming the band in 2011, the group released a seven-song EP titled “Pickin’ the Pines” which includes a rousing, outlaw-country balled penned by McInerney called “Oklahoma.”

“We came together with the idea of creating some kind of fusion country in an alternative style,” McInerney said

The band’s roadhouse sound and their alt-country style have given them a reputation as “a whiskey swilling roadhouse outfit.” They have built a following in the Seattle area based on their high-energy shows and boot stomping rhythms. Though their show may be somewhat more subdued Saturday, there’s bound to be plenty of high-energy moments as well.

The WICA show and two other upcoming shows in Fremont and Ballard will help fund the band’s new recording project, which they plan to begin later this spring. McInerney said they are meeting with a producer this week and have already been working on new material.

McInerney grew up hearing his father, Mike McInerney, playing countless old country, roots and bluegrass tunes, with some Beatles and James Taylor thrown in for good measure. “I come from a background of playing around a campfire and picking old country and bluegrass tunes,” he said. “We never miss a chance to sit down and play music together.”

For tickets and more information on this Saturday evening’s concert or the Weatherside Whiskey Band, please visit the following websites: http://www.wicaonline.com and http://weatherside.us/Weatherside/Weatherside_Whiskey_Band.html.