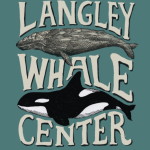 The public is invited to cruise with Mystic Sea Charters from 5 to 7 p.m. on Sunday, March 30 in a fundraiser for the Orca Network and the new Langley Whale Center at 117 Anthes Street.

Right now, the population of Gray whales is arriving to feed on ghost shrimp in Saratoga Passage; many have been spotted in the last few weeks as they return to this area as part of their yearly migration.

Refreshments will include local Whidbey Island Wines and hors d’oeuvres. The cruise will launch out of Langley at 228 Wharf Street. To book reservations go to www.orcanetwork.org and click ‘tickets available here.’ If more more than one ticket is desired, note that the “quantity” should be changed. Cost is $75 per person.

The Mystic Sea is a classic confortable 100-foot vessel with seating outside on the deck and inside for weather free viewing. Check out the boat at www.mysticseacharters.com. The Orca Network team of Susan Berta and Howard Garrett will be on board to share information on the whales.

The new Langley Whale Center  provides a place where residents and visitors to Whidbey can  learn about the wonderful world of whales. The Center is open from 11 a.m.- 5 p.m. Thursdays-Sundays during the spring, with expanded hours for summer. The Center is open for self-guided tours on Mondays-Wednesdays, but no docents will be on hand.

The Whale Center was opened to further the efforts of raising awareness of the whales of the Pacific Northwest, and the importance of providing them healthy and safe habitats. It features Orca and Gray Whale Rooms, a meeting room with art and photos and a small gift shop. Displays include whale natural history and local photos, whale videos, and specimens such as skulls, bones, baleen, whale lice, barnacles, and more, including a huge 17-foot Blue Whale jawbone, which will soon be made into an archway over the Whale Center’s entry.

The Orca Network is a non-profit organization with projects include the Whale Sighting Network, Educational programs and materials, the Central Puget Sound Marine Mammal Stranding Network, and the campaign to retire Lolita, an L pod orca, from a life of show business at the Miami Seaquarium.

Whidbey Island has several whale seasons, according to Berta. The first season begins in spring, from March through May or June, when a small population of 10 to 12 GrayWhales arrive to feed on ghost shrimp in Saratoga Passage and Possession Sound. The transient Orcas come to Whidbey Waters as well, but with no set schedule or time of year. It’s always a spectacular surprise when they show up to hunt.

The Mystic Sea Charters offers cruises out of Langley Harbor from March through May 18. Owners Monte and Cindy Hughes have generously donated all proceeds to the Whale Center for the March 30th cruise and hope it will be a cruise to remember for a lifetime. The cruise is sponsored by Mystic Sea Charters and the Langley Main Street Association, which is working to preserve the history and economic viability of Langley.

To make a reservation for the Whale Benefit Cruise go to www.orcanetwork.org or email mainstreet@whidbey.com for more information.