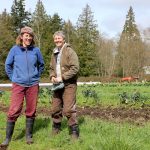 What Farmers Do in the ‘Off Season’ at Sky Root Farm

On a chilly morning in early April, business partners Beth Wheat and Arwen Norman burned holes into rows of long black cloth covering a newly tilled bed at Sky Root Farm in Clinton. They’ll add fertilizer and hand-smashed oyster shells to each exposed circle of soil to increase nutrients and minerals, then tuck baby strawberry plants in every foot or so. The surrounding cloth will keep weeds to a minimum.

Thoughts of such a sunny crop seemed incongruous with the cold and cloudy weather in which they were working — months before the vibrant berries would grace the Sky Root Farm stand at the Bayview Farmers Market (which opens on April 29 this year). But as these farmers will tell you, running a farm business requires far more preparation and planning than simply plunking seeds in the ground. Much of the necessary forethought happens during the darkest days of the year.

Wheat and Norman worked on autopilot as they listed the accomplishments of the winter season: several building projects, continuous veggie and meat production, community outreach, and lots of paperwork.

“It’s not as long a winter as most people think,” laughs Norman. Sky Root’s weekly harvest for their abundant community-supported agriculture (CSA) boxes ended in late November 2016, and they started seeding the greenhouse in early February 2017. Those slightly slower-paced couple of months weren’t necessarily full of leisurely lie-ins or margaritas on the beach.

Vegetable starts in the greenhouse (Photo by Jenny Goff)

Sky Root kept veggie production going all winter long for their year-round fresh list. During the winter, customers could pick and choose offerings such as kale, collards, spinach, radishes, and storage crop veggies such as celeriac, potatoes, and rutabaga from the weekly or bi-weekly emailed list.

To make future harvests more comfortable and efficient, a crowd-funded building project was underway: a washing and packing station under a newly built overhang outside the vintage barn. The new space is considerably more protected from the elements than their current setup and will expedite their long (and sometimes frigid) harvests. Nearby, a second greenhouse was erected to get an additional jump on vegetable starts. More greenhouses are planned to extend the growing season and increase vegetable offerings during the cooler months.

The veggies weren’t the only living beings that needed attention during the off-season.

The 15 goats, hundred or so chickens, and handful of ducks required daily feedings. The goats needed new areas to roam and forage. The laying hens needed to be let out of the coop every morning to free range and then locked into the coop every night to keep them safe from predators. The 80 chickens raised for meat were nurtured from day-old chicks under heat lamps into a flock of skittish youngsters pecking through the remains of last season’s crops in a hoop house and fertilizing the fields in mobile “chicken tractors.”

One doesn’t imagine farmers sitting at computers poring over spreadsheets, composing emails, and filling out forms for hours, days, or weeks on end, but that is often just what it takes to run a sustainable farm. Confirming patronage with current CSA members, attracting new customers, explaining logistics via email, and keeping track of income and expenses takes time and energy.

Then comes the paperwork. Although they have been using organic practices since they started the farm in 2012, the Sky Root team has been working diligently to complete the lengthy application for organic certification, which they hope will be confirmed in the coming months. Wheat commented, “It provides a method of verification [for customers who don’t yet know us]. We are what we say. We are a lot more than organic, but it is a good first cut.”

They needed more paperwork for securing seasonal workers. An integral segment of their workforce (in addition to a handful of locals who work part-time on the farm) comes from interns through the state-run Farm Internship Project. Wheat and Norman view it with a much larger cultural scope than simply taking on more people to help their operation. “It is big value for the future of America,” says Wheat. “That’s how I got my start,” adds Norman. With the review and approval of the state, they will recruit three interns for three- to six-month commitments as a way to pass on the knowledge and skills required to keep sustainable farming practices alive.

As their work with interns suggests, community outreach is an important part of Sky Root’s mission. Once a week during the winter, Wheat and Norman welcomed the youngsters of the Calyx Community Arts School to experience farm life. The kids helped move animals, plant garlic and flowers, build a chicken coop, and prune raspberries. They also learned how to use various manual and power tools to accomplish those tasks, an empowering rite of passage for many of them.

If all that wasn’t enough to keep them busy, Wheat and Norman also have jobs off the farm, as do many other farmers across the island: Wheat as a professor at the University of Washington in Seattle and Norman as assistant gardener at Meerkerk Gardens in Greenbank.

Beth Wheat takes a lunch break next to her pile of winter reading. (Photo by Jenny Goff)

When the lunch bell called the farmers into the house, they abandoned prepping the strawberry rows for a time. Wheat pulled out a pile of agriculturally-themed tomes and professed her love for reading during the off-season. She may have hunkered down with a cup of hot cider from their apple trees instead of a margarita on the beach, but who says farmers didn’t have any downtime?

Sky Root Farm still has several memberships available for their 2017 weekly CSA starting May 24 and running through Thanksgiving. Visit them at The Bayview Farmer’s Market opening April 29, 2017.

Jenny Goff is a writer, chef, gardener, and sailor living on a small farm in Bayview.