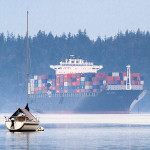 Where Did Those Big Ships Come From? || Sabot Sailor to Puget Sound Pilot

Residents along Saratoga Passage were startled when they began to see 1,000-foot long container ships anchoring at Holmes Harbor in mid-February. Calls were actually made to the Coast Guard from locals concerned that ships “had lost their way.”

A cormorant air dries its wings, ignoring the container ship in the distance in Holmes Harbor. (photo by David Welton)

Protracted labor negotiations between the Pacific Maritime Association and the International Longshore Warehouse Association had resulted in delayed off-loading and turnaround at the dock, with backed-up ship traffic having no place to go. The Coast Guard, therefore, routed the vessels toward seldom used anchorages such as Holmes Harbor, with a maximum depth of about 250 feet, to park the ships until space became available in Seattle, Everett or Tacoma.

Modern container ships are big; those docking in Seattle are about 900-1,150 feet long with forty-foot drafts. Capacity is expressed as TEU (Twenty Foot Equivalent Units). Thus, a 10,000 TEU vessel will carry 5,000 40 foot-long containers and contents. If all containers were unloaded to waiting tractor-trucks and then proceeded to the highway, with appropriate spacing there would be a convoy of semi-trailer trucks stretching from Seattle to the Canadian border.

The size of these ships is hard to believe until you see them in the harbor. (photo by David Welton)

It takes a lot of horsepower to move these ships. Engines are 85 feet long and three stories high. The crankshaft alone weighs over 300,000 pounds. You can’t order these engines at Home Depot for delivery; they are built on site as the ship is constructed in the yard. The pistons of the 90,000 HP in-line twelve cylinder engines are almost 40 inches in diameter. The engine rooms are six stories high. Although mileage can be measured in feet per gallon, efficiency is maximized by the bulk of the load.

The demanding skill required to safely navigate the waters without collision, grounding or environmental disaster requires extensive experience, training and familiarity with local conditions, and is personified by Whidbey area resident Blair Bouma. Descendant of a Dutch sea-captain and son of a long-time Santa Barbara waterfront director, he raced eight-foot Sabot-class sailboats in the harbor at the age of eight and, a decade later, studied naval architecture at the University of California. A summer job on an offshore oil supply ship led to a permanent position with Arco. He worked his way up through the ranks and his last command was the Polar Tanker, Endeavor.

It’s a big journey from sailing a Sabot in the harbor of Santa Barbara to handling massive container ships. (photo by David Welton)

After many months-long voyages he yearned for a job closer to home, so he studied to become a Puget Sound Pilot. His apprenticeship included 267 trips on a variety of vessels to different harbors and moorings in Puget Sound. He was also required to draw, from memory, 25 detailed charts of the area.

Now Captain Bouma is one of about fifty Puget Sound Pilot Association members who greets ships on a pilot boat at the mouth of the Strait of Juan de Fuca, climbs a rope ladder 40 feet or more to the deck and guides the behemoths to their final destinations.

Holmes Harbor is home at this time to three container ships, seen here in the tranquil early morning light. (photo by David Welton)

“As the first American to step aboard an inbound vessel,” he said, “I enjoy interacting with crews from all over the world and using my skills to safely bring the vessels into port. The icing on the cake is the opportunity to spend time on the water and to see Puget Sound in all its beauty.”

Once in sight of land, sailors are eager for shore leave. Unfortunately, they are confined to the ship at Holmes Harbor and cannot enjoy the vibrant nightlife of Freeland—so enticingly close by. They relieve the boredom with deferred maintenance and shipboard ping-pong tournaments. The refrigerated containers require generator power and attention so there is still plenty of work to do.

When called to depart Holmes Harbor, the ship will sail—under the guidance of a Puget Sound Pilot—to its port to deliver cargo. It will be nudged toward the pier by a tugboat, quite possibly one born at Nichols Brothers Shipyard at the foot of Holmes Harbor!

There is still a long line of ships to unload and hundreds of containers are still on the docks awaiting transport to regional markets. It will take weeks to months to clear the backlog, so the sight of container ships in Saratoga Passage will remain part of Whidbey life for some time to come.

David Welton is a retired physician and staff photographer for Whidbey Life magazine. He thinks and processes information visually and, therefore, is a man of few words with (he says) limited verbal communication skills. The awesome spectacle of a huge machine dwarfing Homes Harbor prompted him to overcome his disability.  This is his first article for the mass-media.

Leave a Reply to Tim Mack