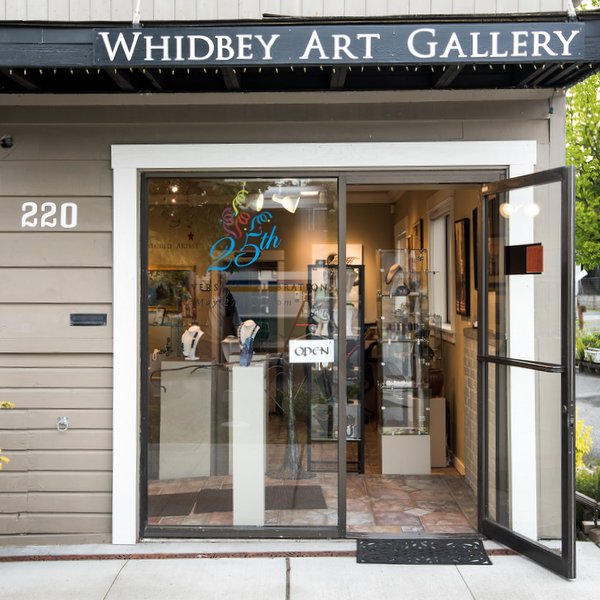 “It was at this spot, Memorial Day weekend, that the co-op gallery was started,” said Tom Hanify, who met with members of the original Whidbey Art Gallery at the Braeburn restaurant in Langley.

“Except it was called the Raven Cafe then,” said Christi Shaffer, who was also there, along with Mary Ellen and Ron Ward and Moses “Moe” Jerome. Shaffer joined the co-op a year after it first began. She’s a ceramic artist whose work incorporates impressions of lace, leaves, and stamped letters into functional plates, teapots, and bowls with driftwood handles.

“It started with a meeting of interested artists who showed their work at the Raven Cafe on Memorial weekend 1992,” continued Shaffer. “Then a group decided to form a gallery starting in the back and moving to the front. The gallery remained here three years, and then we wanted to expand. We went to the Jones Department Store, which is now Music for the Eyes.”

“Paul Schell was instrumental in getting us in,” added Jerome, an oil painter whose poster of a mermaid kissing a mortal was chosen to illustrate the poster for the 2012 Choochokum summer art festival in Langley. The late Paul Schell, a former mayor of Seattle, developed the Inn at Langley with his wife Pam and was known for his can-do-ness in the community. “He wanted his guests…”

“… to see our art,” finished Shaffer. “Paul loved us! He bought gifts for the hotel employees from our artists.”

“We were at the ‘rug’ shop for five or six years and then moved to Second and Anthes (where Whidbey Telecom’s the Big GIG is now housed),” Shaffer continued.

Jerome jumped in: “We moved to the corner, an interesting space to merchandise in. As we moved through the years, the economy went bad. In 2008, we closed.”

Mary Ellen Ward said that before the 2008 crisis, the co-op members tried an idea that paid a month’s rent.

“…with 12 different people,” added Mary Ellen Ward. “I’m encouraging them to do it again. The first calendar was good.”

“More like PG-13,” said Hanify. “They closed the storefront, but the group kept going.”

“They can squash us, but they cannot stop us,” said Ron Ward, a sculptor and painter.

“We were closed two years,” said Mary Ellen Ward. “We looked around for a storefront and found what is now the vet’s (Animal Hospital by the Sea). The building needed lots of work. Everyone pulled together. We painted and fixed doors. When we got it set up and beautiful, they sold the building and we moved to where we are now. We got re-established and are stronger than ever.”

“We’ve been through the fire,” adds Ron Ward.

The friends sit around the table, crack jokes, finish each other’s sentences, and remember the various buildings that housed their art, along with the perseverance to carry on in the wake of the 2008 financial crisis.

Hanify, a photographer, has been with the co-op for three years. His work reflects his interest in nature, landscapes, and travel. He now chairs the gallery’s marketing committee and manages its website and Facebook presence.

“Mary Ellen runs the gallery now,” he says. “She’s the CEO. I call her the empress.”

“Ann Sayvitz used to run the co-op,” Mary Ellen Ward says. “Ann helped us tighten and review policies through her expertise. She gave us structure. When we lost her (she passed away last October), we struggled with having different people take her place, and it occurred to me how the world has changed and how we’re still a group dedicated to sharing our art. It’s like music. It’s a dimension.”

“It is the soul of life,” adds Jerome.

“We’re trying to move forward in step with our times and hold on to what we value,” Mary Ellen Ward continues.

“We have 37 artists now with an emphasis on local art,” Hanify added. “We no longer emphasize the ‘co-operative’ part and say rather that it is an artist-owned gallery. We’re looking for more artists to join us.”

At the monthly Langley Art Walk on April 29, the gallery was packed with visitors. Ron Ward gave a personalized tour of the gallery after sitting outside for a moment, enjoying time with his grandchildren in the early evening sun.

The gallery at its current location on Second Street in Langley. (Photo by Tom Hanify)

Come celebrate the gallery’s 25th anniversary at a party hosted by the artists on Saturday, May 27, from 5 to 8 p.m. There will be live music and refreshments, and Artists in Action will be painting and demonstrating artistic skills.

Kate Poss worked as a library assistant at the Langley Library until last June, when she retired. She worked for three summers as a chef aboard a small Alaskan tour boat from 2008 to 2010. She was a newspaper reporter in Los Angeles for many years before moving to Whidbey Island, where she likes cooking for new and old friends, hiking, reading great fiction, and writing her second novel with friend Fred Bixby.