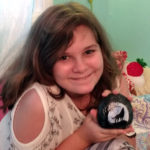 Rocks That Build Bridges (And Break Down Walls)

This rock was created as part of a gift basket awarded to celebrate the group reaching a membership milestone. (Photo by Wendy Jones)

Bright spots in the world often show up in odd places and strange forms. Sometimes, the biggest of those spots fall into our paths at unexpected moments or come from a complete stranger. It’s always a thing of beauty when they reveal themselves in the exact right place and time to flip our entire outlook from stormy to sunny in a split second.

Whidbey Island Rocks is a group dedicated to creating those serendipitous moments for locals and visitors. People create, then hide — or at times directly give — lovingly decorated rocks in locations all over the island. Some rocks carry images. Others carry a written message of love or encouragement. Some are created by children, who are developing their artistic ability while others come from the hands of Whidbey Island’s established artists. Regardless of appearance, the result is the same: these rocks are destined to deliver an anonymous hug and a smile to those who find them.

Rock decorators and recipients are connected via a Facebook group managed by Oak Harbor residents Shelly and Scott Darnell. Inspired by a similar group established in Port Angeles, the Darnells didn’t imagine things would grow beyond a small group of their friends and family.

“When we set up the Facebook page, I thought it would be a fun way for us to stay connected as a little group. Then I started noticing people that I didn’t even know liking the page and getting involved. It took on a life of its own and grew from there,” Shelly says.

Bailey Darnell’s connection with the treasures she has collected as part of Whidbey Island Rocks is deep, just like the relationships she has built as part of her participation. (Photo by Wendy Jones)

Scott and Shelly work hard managing the page as part of their busy family and professional lives. While Shelly was primarily responsible for getting the group started, Scott has moved over to doing more of the heavy lifting to keep things running. Every week, he plans and coordinates events that bring group members face-to-face.

Their daughter Bailey, 11, was the catalyst who put the social experiment in motion after she became aware of a similar group that had recently popped up in Port Angeles. “I get a little hyper-excited sometimes, and I was excited to start it,” says Bailey. “You know how moms can be. I had to keep asking her over and over, but finally, she got it done,” she adds.

As Bailey shows guests around the family home, her enthusiasm for the rock movement  becomes easy to understand. There are multiple framed examples of Bailey’s artwork, and her talents have earned her impressive accolades for her young age.

Another thing that becomes evident is how much Bailey loves a good memento. Any item that falls into her field of vision has a unique story attached to it that she expresses with touching detail. To Bailey, each seemingly random artifact is part of her history, and she proves this by explaining its significance with a contagious, effervescent energy. Painting rocks that serve up a smile on impact, and then become part the finder’s history in a tangible form, is right up her alley.

Shelly Darnell and her daughter Bailey are a team when it comes to painting rocks for Whidbey Island Rocks activities, sharing feedback and suggestions for repairs when things don’t go according to plan (Photo by Wendy Jones)

Sending good vibes into the world is something the Darnells take seriously, and the whole family is part of the team. (While Shelly, Scott, and Bailey are more public-facing, Bailey’s big brother Brendon, 16, lends his technical skills to keep the digital aspects of the project running smoothly.) Whidbey Island Rockers can tell numerous stories of the way rocks have changed lives, and pivoted outlooks or made strangers into friends. Even a skeptic would have a hard time arguing against that point after hearing a few anecdotes of happy endings the rocks have facilitated, according to group members:

Whidbey Island Rocks member Barb Cope holds a special spot in the Darnell family’s hearts, and also in their kitchen. Her signature Chicken Rocks have their own place of honor. (Photo by Wendy Jones)

On a more local level, people are enriching their own lives by gaining friends (and artistic confidence) through the group. Coupeville resident Barb Cope exemplifies this. She hadn’t so much as touched a paintbrush when she got involved. A friend added her to the Facebook group when there were fewer than 200 members. Today, she is a “rock star,” known for dispensing an endless supply of encouragement and support to her fellow group members and also for her rocks, which are emblazoned with her signature image: chickens. She underplays her fame but loves having a personal brand that works in the economy of painted rocks.

“People ask if I will sell them one, and I don’t want to do that,” Cope says. “I am not an artist. I like trading them. Sometimes it’s someone I know and sometimes it might be a complete stranger. It’s nice to be able to create something that people appreciate.”

For Cope, being involved with Whidbey Island Rocks provides serenity and variety when life gets crazy. As much as she loves spending time with her family, tending her garden, and other hobbies, the group gives her a special outlet for connecting with her own thoughts and the world in general.

While some rocks are hidden in urban locations, hiding them on beaches and forests is most common. It is a special treat to find a bright gem like this tucked amongst the natural beauty. (Photo by Wendy Jones)

“It is a soft place to land. When I am doing this, I don’t have to think about politics or the pressures in the world. For me, it’s a wonderful, uplifting place where every person and their art can be celebrated. I have met amazing people that I simply wouldn’t have come across in my day-to-day life. It’s like a family.”

If Whidbey Island Rocks is a family, the family business of bringing happiness in unexpected packages is thriving. Learn more about how to get started here, and watch for rocks as you go through your daily routine. Remember, bright spots come when you least expect them!