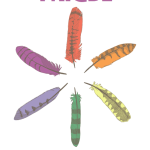 Everyone is invited to Whidbey Island’s first ever Queer Pride Parade, a celebration of the “queer” in all of us.

The parade will start at the top of Cascade Avenue in Langley at 2 p.m. Sunday, Aug. 10 and loop through downtown.

The idea for Langley’s Queer Pride Parade came from parade organizer and Langley resident Kathryn Lynn Morgen, who said she chose the word “queer” over “gay” because it moves beyond the nomenclature of hetero- and homo-sexual to encompass the great swath of gender roles that she sees all around her in modern life.

By celebrating our differences, Morgen says, we are celebrating living outside the imposed hetero-normative gender roles and their subsequent restrictions.

Morgen said she is exhausted by the constant labeling of everything in our society, mainly people. “Queer” may be an outdated term, but perhaps that’s what makes it right. It’s like repeating a word over and over again until it no longer is associative; it’s just a word.

“We must label everything we possibly can until we can’t anymore and labels become outdated. We must tire ourselves out of labeling. We must expose every last combination of labels (or at least reach as close as we can to the infinite combinations of labels) before we, as a society of individuals, can ALL say it doesn’t matter anymore,” Morgen added.

She said she hopes Whidbey’s Queer Pride Parade will not only celebrate our differences, but will also increase awareness of the great, colorful spectrum of possibilities that define what it is to be human.

“It’s not just gay or straight, male or female,” she said. “We are creating new pronouns. We are experiencing a massive shift in consciousness about the way we express our identities, and the Queer Pride Parade is here to honor that.”

Registration will be on the day of the event. Parade participants are asked to meet at the Langley Middle School bus lot at noon to line up. It will proceed down First Street, go left on Anthes Avenue, left on Second Avenue, and back up Cascade Ave. to the bus lot. There are a limited number of slots for walking, vehicle and float units. For more info visit the website at www.queerparade.com or check out the Facebook Event Page for guidelines on what is acceptable in the parade.

Queer Pride Parade is a grass-roots event in need of volunteers for various tasks including publicity, day-of coordination help and float builders. It also seeks financial support in the form of direct donations or sponsorships for costs such as printing promotional materials. To volunteer or make a donation, visit the website or email queerparade@whidbey.com.