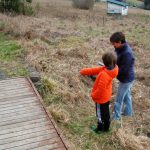 Whidbey Island has a tsunami funnel called Cultus Bay. The good news is that, at least so far, the tsunamis have been measured in centimeters, not meters. The cause might be a surprise, and the way some people learn about it might be, too.

Cultus Bay is the counter-balance to Deception Pass. The pass is a dramatic natural feature that defines the northern tip of the island. Cultus Bay is the much subtler natural feature that defines the southern tip. Deception Pass is well-known because of the public park, the bridge, and the passage. Cultus Bay is barely known and rarely visited because almost the entire shoreline is privately owned. Thanks to the Whidbey Camano Land Trust, a beautiful vantage point has been preserved that provides a view of an ancient tsunami, as long as you have a good imagination.

Hammons Preserve is a 9.5-acre property of the land trust that has one of the best views of the Bay. It is worth a visit to be inspired by the view and walk the trails. Sit on the bench at the top of the field, though, and imagine a different scene.

About a thousand years ago, the Seattle Fault snapped in an earthquake. Within a few seconds, portions of Bainbridge Island and West Seattle rose over 20 feet. Land that had been wet was suddenly dry. The residents of Whidbey Island undoubtedly felt it, too. So did the water. The sudden rise of the land caused a rise in the water. A tsunami surged north and south, up and down Puget Sound. Fortunately for Whidbey, the island is skinny from that angle and much of the water passed on either side. Unfortunately for Cultus Bay, it and the two headlands that bracket it, Scatchet Head and Possession Point, were pointed straight at the wave. The tsunami swept into the bay, channeled by the ridges, ran past the high tide line and began to climb the hill.

The view from Hammons would’ve been amazing (though it was probably covered by trees at the time). Hopefully, the village that stood there was either vacant or far enough back to be safe.

Geologists have dug into the soil trying to understand the sequence of events. It looks like the tsunami charged in, hit the spit at the head of the bay, made the turn and continued up the hill toward what is now Bailey’s Corner. The deepest deposit of silt was more than four feet thick.

Tsunamis are as unpredictable and as inevitable as earthquakes. The difference now is that we’ve built homes and roads along the shore. Another element of luck is involved. The difference between high and low tide can be as much as twelve feet. A tsunami at low tide may live up to the name tidal wave and do nothing more that be the subject of impressive videos. A tsunami at high tide would start 12 feet higher and start at the high tide line. For Cultus Bay, that’s a difference of about a mile and a half.

There is a surprising amount of material available about Whidbey Island’s tsunamis, and even more is available about the epic possibilities from the Cascadia fault that would have a much larger effect on the northwest side of the island. A tsunami surging through Deception Pass would be amazing to see from a safe vantage.

Cultus Bay has that safe vantage point in Hammons Preserve. The Preserve is home to an EarthCache, which is a geocache that provides an earth science lesson and meets specific guidelines established by the Geological Society of America. GPS in hand, adventurers find their way to Whidbey Island to learn more about the planet they live on — in this case about the impact of a tsunami in Puget Sound.

People don’t need to be a geocachers to visit Hammons Preserve, though. They can come for the simple joy that was Al Hammons’ inspiration for preserving the site in the first place: to “rest their souls awhile.”

Tom Trimbath is an author, nature photographer, and a project consultant. He has written and self-published six non-fiction titles, and produced five photo books of Whidbey Island. He also has managed several social media campaigns for authors, artists, and non-profits. Since 2009, he has been one of the Whidbey Camano Land Trust site stewards for Hammons Preserve.