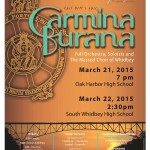 Saratoga Orchestra will join with the singers of the Massed Choir of Whidbey to present “Fairy Tales & Ancient Legends”—a concert including the exquisite scenic cantata, “Carmina Burana” by German composer Carl Orff, along with excerpts from Engelbert Humperdinck’s “Hänsel und Gretel.”

The concert will be performed twice, at 7 p.m. on Saturday, March 21 at Oak Harbor High School and at 2:30 p.m. on Sunday, March 22 at South Whidbey High School.

Anna Edwards conducts more than 60 musicians and 150 singers from Whidbey Island, helping to unify the talent of both the north and south ends, including the students from area high schools. Soloists include Karl Olsen, Lisa Berritella and Voltaire Verzosa. Choral preparation is by Darren McCoy and Dr. Dianne Vars.

German composer Carl Orff’s 1937 work, “Carmina Burana,” is probably the most frequently performed choral work of the 21st century. The work came out of a large collection of medieval poems found in the early 19th century in southern Germany. The songs (over 1,000 of them) were written in a mix of Latin, German and medieval French by the Goliards, a band of poet-musicians comprising scholars and clerical students, who celebrated with earthy humor the joys of the tavern, nature, love and lust.

Also from Germany, Engelbert Humperdinck, who wrote the music for “Hansel and Gretel” was inspired by his sister, Adelheid Wette, who had written a libretto based on the Grimm fairy tale, and asked her brother to set it to music during the 1890s. Later, Engelbert and Adelheid decided to turn this modest family project into a full-scale opera, which premiered in Germany in 1893. It was an instant hit and remains an everlasting masterpiece. The young composer Richard Strauss, who was the assistant conductor for the premiere, called it “a masterwork of the first rank.”

The 150-voice MASSED CHOIR OF WHIDBEY is comprised of residents from all corners of Whidbey Island. Represented choral ensembles include Open Circle Singers, Trinity Lutheran Church Choir, Langley Methodist Church Choir, Island Consort, Whidbey Community Chorus and Oak Harbor High School, among many others. The sheer size of the orchestra and choir make it necessary to hold these performances in the gymnasium of each school.

“Fortuna”, the Roman goddess of luck, chance and fortune, is featured in the first movement of the “Carmina Burana” cantata. In the name of the great Fortuna, each concert will hold a “Sharing our Fortunes” fund drive. Representatives from Help House and Good Cheer will be on hand to answer questions about the vital services they provide to our community.

General Admission tickets are $25 Adult and $20 Senior/Military. Students under 18 are admitted free (under 14 must be accompanied by a paying adult).

Tickets are available for the Langley concert at Moonraker Books in Langley and Vino Amore in Freeland. Tickets for the Coupeville concert available at bayleaf in Coupeville and Click Music in Oak Harbor.

For online tickets and information, please visit our website www.sowhidbey.com or call 360-929-3045.