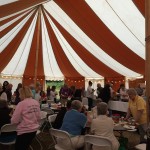 Book aficionados from 20 of the 40 book clubs on Whidbey Island recently gathered to share their top reads for the past year (see list below). This is the eighth gathering of the group since its founding in 2005 by the Book Owls Book Club.

The best sweatshirt slogan belongs to the Dear Gentle Readers Book Club whose slogan, “Our book club can beat up your book club,” is tongue-in-cheek intimidating. Sporting the sweatshirts are Blair McDaniel and Anne Sullivan. (photo by Donna Hood)

Table signs display some clever and amusing Book Club names. One of the most descriptive club names is ROMEO, which stands for Retired Old Men Eat Out. (photo by Donna Hood)

Book Clubs who did not receive an email invitation to this year’s event should contact Donna Hood at donnahood@whidbey.com to be sure their club is on the list for 2015.

“And the Mountain Echoed” by Kaled Hosseini
“The Swerve by Stephe”n Greenblatt
“A Tale for the Time Being” by Ruth Ozeki
“Agent Zig-Zag” by Ben Macintyre
“1000 White Women” by Jim Fergus
“House Gir”l by Tara Conklin
“The Round House” by Louise Erdlich
“The Rosie Project” by Graeme Simsion
“The Boys in the Boat” by Daniel James Brown
“Zeitoun” by Dave Eggers
“Light Between Oceans” by M. L. Stedman
“The Lewis Series” by Peter May
“Operation Mincement” by Ben Macintyre
“The Keeper of Lost Causes” by Jussi Adler-Olsen
“My Beloved World/True American Dream” by Sonia Sotomayor
“Where Did You Go” Bernadette by Maria Semple
“Caleb’s Crossing” by Geraldine Brooks
“Mink River” by Brian Doyle
“The Brothers: John Foster Dulles, Allen Dulles and Their Secret World” by Stephen Kinser

Photo at the top:  Some 125 book lovers gathered under Henry, the big tent behind Langley Middle School, to exchange books, vie for raffle prizes, disclose their #1 reads for the year and enjoy several soliloquies by Island Shakespeare Festival actors.  (photo by Donna Hood)