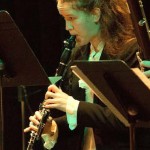 The Saratoga Orchestra of Whidbey Island will feature “Spring Grove,” a composition by native daughter Angelique Poteat, in its third concert of the season at 2:30 p.m. on Sunday, March 9 at South Whidbey High School.

Poteat grew up in Clinton on South Whidbey and began playing clarinet in the fifth grade (“because my mom said ‘no’ to the tuba, even though that’s what I originally wanted to learn”). She was a saxophonist with the the award-winning South Whidbey High School Jazz Band and participated several times in the Lionel Hampton International Jazz Festival before graduating in 2004.

During her summer breaks in college, Ms. Poteat returned to Whidbey to visit with family and friends on the island. Her biggest supporter was Michael Nutt, the founder of Whidbey’s Saratoga Chamber Players, who encouraged her to play her clarinet with a string quartet that he organized.

After earning Bachelor’s and Master’s degrees in Music Composition, Poteat traveled to Germany to further her studies in composition. When she returned to the states, she found herself asking, “What do I do now?”

“Music schools teach you how to win auditions,” she said, “but not how to make a living with what you learned before the audition is won.”

She did a lot of freelancing, made connections in the Puget Sound music community and became a member of the Seattle Modern Orchestra. By then, she was doing more composing and trying to learn how to get her music performed.

Several of the conductors with whom she’s worked have been very supportive. Julia Tai, conductor of the Seattle Modern Orchestra, premiered one of her compositions with another orchestra she conducts—the Philharmonia Northwest. Anna Edwards premiered “Spring Grove” with the Seattle Collaborative Orchestra.

Poteat currently performs with the Yakima Symphony Orchestra, where she has been the principal clarinetist for two years. She also is a member of the Seattle Modern Orchestra, which performs large chamber ensemble pieces.

At 28 years of age,  the small-town Whidbey girl is well on her way to becoming a recognized composer. She has just been commissioned to write a piece for the Seattle Symphony to be performed in their 2014-2015 season.

Guest conductor Anna Edwards will direct the orchestra with additional compositions by Ravel, Barber, and Poulenc. Edwards is the third guest conductor “auditioning” for the role of permanent conductor to replace the orchestra’s founder, Leigh Burns, who retired last year.

Edwards is the founder and music director of the Seattle Collaborative Orchestra, an intergenerational symphony orchestra consisting of highly talented high school and university students who perform with Seattle professional musicians including the Seattle Symphony and the Pacific Northwest Ballet. She is also the music director at Roosevelt High School where she has built the orchestra program over the past thirteen years into a national award-winner.

Catherine Haight will be the featured soprano soloist. She is known as one of the premier soloists in the Northwest and, during the last 20 years, has appeared with the most prestigious musical organizations in the area.

The Saratoga Orchestra is a well-respected, professional classical symphony orchestra. Most of the members have also held, or currently hold, positions in esteemed orchestras across the country. In this third concert of the season, Larry Heidel, Executive Director of the orchestra, says that the music being featured invokes “the richness and sweetness of spring,” hence the title “Simply Delicious.”

The Saratoga Orchestra performs concerts island-wide, including performances in Oak Harbor, Coupeville, Freeland and Langley. A young conductor mentorship program has been established and the orchestra’s “Young Artist Competitions” have given local youth a chance to solo with the orchestra. Additionally, a Talent Development Program has been implemented that pairs young musicians with seasoned professionals.

Tickets for the concert are $20 and $18 (seniors & military) and may be purchased at Vino Amore in Freeland, Moonraker Books in Langley, Bayleaf in Coupeville and ClickMusic in Oak Harbor. Tickets are also available from Brown Paper Tickets at the orchestra website. Students under 18 may attend at no charge.

More information about the concert and the orchestra is available on the orchestra’s website: http://www.sowhidbey.com/