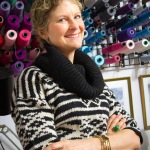 Whidbey’s Lovie Couture Appears on Stage with the Seattle Symphony

Lovie began sewing at the age of four and iceskating at nine. She moved to Colorado at 16 to train as a skater, competing in national skating competitions before an injury ended her Olympic dreams. However, she stayed involved with the sport as a costume designer and coach. After studying at New York’s Fashion Institute of Technology, Lovie took over her mother’s iceskating apparel business.

After starting her first company, Lovie worked with the non-profit group “Figure Skating in Harlem”, outfitting the 75-member team. Since then she has designed and sewn several thousand custom costumes for synchronized iceskating teams and competitive dance and figure skaters.

At one time, Lovie Couture was outfitting some 50 teams per season. Now that Lovie is making costumes on her own, she figures she’ll do ‘only’ five teams per year. (Each team has 15-20 members.) To assist her, her husband John—the other half of Lovie Couture—put into place a software program capable of pattern design, grading and marking. After taking 15 or so measurements from each team member, Brenda Lovie can print out perfect custom-fitted patterns.

“I love the process of working with my customers to design the best custom costumes for them,” Lovie said. Her own performing experience combined with her designing/sewing skills allows her to achieve maximum comfort and perfect fit. In each costume she makes, she aims for a combination of softness against the skin and freedom of movement.

Violinist Gloria Ferry-Brennan described Lovie as, “incredible to make designs so flattering, and I feel good in them. I don’t have to worry while I’m playing.”

Lovie’s next projects include designing for ballroom dancers and high-end custom couture, sewing a bridal gown designed by her newly engaged daughter, Isabelle, and traveling to Dover, England to study Tambour embroidery, a complicated beading technique originating in Luneville, France during the 19th century.

In addition to a packed schedule, Lovie manages to find time to mentor a South Whidbey High School student in fashion design three days a week. She’s also beginning a two-year term as co-chair of the Whidbey Island Surface Design Group  and continues serving as a board member of the Washington Clay Association. She has been working with clay for ten years and has studied with Whidbey’s Robbie Lobell of Cook on Clay.

Where would she like to see her designs make an appearance in the future?

“Carnegie Hall,” she said with a smile.

Brenda Lovie can be reached at brenda.lovie@loviecouture.com while her website is under construction. Check out Lovie Couture on Facebook.

Photo at the top: Brenda Lovie in her Clinton atelier (photo by David Welton)

Natalie Olsen, a fiber artist and writer, performed with her college choir in Carnegie Hall. She wore a loose, black choir robe.