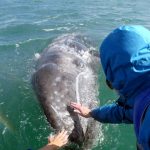 We call them Whidbey’s whales. We hold parades for them. There’s a whale bell to ring if someone sees one. Langley has a whale center, and the island is home to the Orca Network, an organization known worldwide for following and championing every kind of marine mammal. But, whales are citizens of the oceans. Just like lots of humans, they may come to Whidbey to visit, rest, enjoy a fine meal, and then move on. Also like humans, they don’t all act the same.

Whale number 49, nicknamed “Patch” because of the white makings on his tail, feeding in the waters around Whidbey Island (Photo by Jill Hein)

Of all the species that swim in our waters, gray whales are celebrated the most. Gray whales migrate. The ones we get to see are snowbirds. They spend summers in Alaska and winters in Mexico. Warm lagoons are where they give birth. After a few months, they begin to travel north along the east coast of the Pacific Ocean and feed in the shallows along the way. When they visit Puget Sound, their destination is the broad sandy shorelines of Whidbey, Camano, and Hat Islands. There, they patrol feeding grounds, scooping up ghost shrimp, filtering out the sand through the baleen in their mouths, and swallowing the rest.

From sometime around March to sometime around June, they enjoy their protected feast and then leave for the richer harvests in the summer arctic waters. In the fall, they swim back again. Twice a year, they travel more than 3,000 miles, which means eating a lot of shrimp and not staying anywhere too long.

They stay in the shallows for another reason. Orcas. Killer whales are a natural predator of gray whales, but they prefer deeper water. Deeper water means clearer signals for echolocation. Orcas send out sounds, like bats do, and listen for the echoes that bounce back from their surroundings, including other things swimming by. That technique works best in open water, where the only echoes are from potential prey. Shallows get in the way of that. Numerous echoes from varied terrain confuse the sounds. Gray whales in the shallows aren’t safe, but they are safer; especially, if the orcas can find other food in the deeper water.

The ocean doesn’t cooperate with the gray whales, though. Along those thousands of miles are numerous places where the grays must cross deep underwater canyons that are near the shore. Monterey Bay is one such place. Although these places make it easier for whale watchers to see a variety of whales, they require grays to make dangerous and energetic sprints. Another critical point is False Pass in Alaska’s Aleutian Islands. There, Orcas wait for the grays that use the pass as a shortcut to their preferred feeding grounds in the Bering and Chukchi Seas.

The greatest predators of all, however, were whalers. Some whale communities were destroyed, harvested to the point that the whales couldn’t survive. The good news is that whaling restrictions and the discovery of other sources of meat and oil meant that some populations have recovered—most famously the gray whales along our shoreline.

A hundred or so grays survive in the western Pacific near Russia. At least one eastern Pacific gray has traveled to the western Pacific, which is an impressive feat and also evidence that the population could expand. There have also been spurious sightings near Iceland and even in the Mediterranean Sea. So little is known about whales that it’s difficult to know if these were misidentifications or evidence of diverse populations. “Whidbey’s” whales are part of an uncommonly healthy population of 18,000 to 20,000.

Mammal touching mammal in San Ignacio Lagoon. Touching whales or marine mammals in the US is illegal, but in the magical lagoons of Baja, Mexico, a few very special gray whales began a connection with local fishermen in the 1970s. That connection continues to this day under a very stringent and carefully managed ecotourism program that has saved the lagoon from being turned into a salt mine and provides economic stability for the local fishing villages. (Photo courtesy of the Orca Network)

Despite the regularity of our visiting whales, the numbers suggest that our waters are not a common stop. Whale conservation groups like the Orca Network have identified fewer than a dozen regular visitors. Tens of thousands of grays swim right on by. Drop in at the Whale Center in Langley for a board that matches names to familiar faces, or at least flukes. (Donations appreciated.)

You can celebrate whales at Langley’s Welcome the Whales Festival April 8. If you want to see more whales, the Orca Network organizes trips to the birthing grounds in places like San Ignacio. There are also several whale watching cruises operating in Puget Sound, including Mystic Sea, which operates from Langley’s marina. As for seeing them in Alaska, there are whale watching trips up there, too; just don’t expect the weather to be as balmy as it is in Mexico.