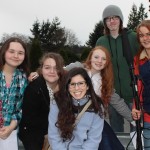 The WICA Conservatory “Acting for the Camera” class, taught by Amanda Yeoman Brooke, has completed a short film titled “Heads or Tails!” Written, directed, and starring the youth students, it was filmed on location around the town of Langley.

Its world premiere will be at 7 p.m. on Saturday, Jan. 9 at the Whidbey Island Center for the Arts. It will subsequently be submitted to the National Film Festival for Talented Youth in Seattle.

The showing is free and open to the public.