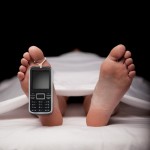 The response to the “Dead Man’s Cell Phone” has been overwhelmingly positive and now for the last week of it’s run, WICA has added a special “Pay What You Will” performance Thursday, Oct. 22.

“Dead Man’s Cell Phone,” is a wildly imaginative comedy by playwright Sarah Ruhl, recipient of a MacArthur “Genius” Grant and Pulitzer Prize Finalist for her play “The Clean House.” It is a work about how we memorialize the dead—and how that remembering changes us; it is the odyssey of a woman forced to confront her own assumptions about morality, redemption and the need to connect in a technologically obsessed world.

Whidbey Island Center for the Arts will present “Dead Man’s Cell Phone” by Pulitzer Prize Finalist Sarah Ruhl from Oct. 9 through Oct. 24. Performances will take place at 7:30 p.m. on Fridays and Saturdays and at 2 p.m. on Sundays. Ticket prices are: Adult $22 / Senior $18 / Youth $15 / Matinee $15.

This play “looks deeply into our hearts and finds plenty to laugh about,” said director Phil Jordan. “Sarah Ruhl has a gift for telling the truth about human beings in a way that is both serious and funny. No other modern playwright captures the human spirit—in all its foibles and strength—in the way she is able to do.

“The play follows the journey of Jean, a lonely woman who finds her way through a dangerous landscape with only a dead man’s cell phone to guide her. Part thriller, part comedy, and completely engaging, ‘Dead Man’s Cell Phone’ is a modern play that feels like a mix of classical tragedy and psychological drama, infused in laughter from beginning to end.”

Online tickets are available until 12 noon the day of the show at wicaonline.org. For tickets by phone, call the Box Office at 360-221-8268 or 800-638-7631. You can also buy tickets in person at the Box Office at 565 Camano Ave in Langley between 1 and 6 p.m. Wednesday through Saturday, or two hours before any show.