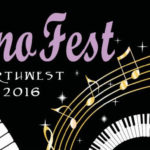 Whidbey Island Center for the Arts presents the fourth annual PianoFest Northwest April 28 – May 1. Catering to music lovers who appreciate piano music that ranges from classical to contemporary, this event showcases a variety of musical talents, each unique to their genre.

This year’s headlining artists Greg Anderson and Elizabeth Joy Roe are revolutionizing the piano duo experience for the 21st century. Hailed as “the intense synchronization of genius” (ThirdCoast Digest) and “the most dynamic duo of this generation” (San Francisco Classical Voice), the Anderson & Roe Piano Duo aims to make classical music a relevant and powerful force around the world. They have appeared on MTV and NPR, toured worldwide as recitalists and soloists, recorded Billboard chart-topping albums, and their Emmy-nominated, self-produced music videos have been viewed by millions on YouTube.
Saturday, April 30 at 7:30 p.m. | All Seats $30

In addition to their festival performance, the Anderson & Roe Piano Duo will offer a free, educational, matinee performance with a Q&A for middle school-aged students. There are seats available for home-schooled students. To reserve a seat contact Deana Duncan at 360-221-8262 or education@wicaonline.org
Friday, April 29 at 1:15 p.m.

Kicking off the festival are Karin Kajita and Nelda Swiggett with a jazz inspired “Sister Act.” Both are former guests of Maureen Girard’s 88 Keys Piano Club at WICA. These Bainbridge Island natives grew up competing for time on the family Steinway before they went on to separate careers as jazz pianists, composers and teachers, winning prestigious awards (Nelda) and playing in exotic locations (Karin).
Thursday, April 28 at 7:30 p.m. | All Seats $25

Opening the weekend is Diane Lines’ Jump! Dynamic Canadian pianist Diane Lines forges a uniquely feminine approach to the era of jump blues, swing, and boogie-woogie. Diane was the pianist/accompanist for Grammy winner Michael Bublé and has also performed with a variety of artists including: Gabriel Mark Hasselbach, Marian McPartland, Dee Daniels, Jim Byrnes, and more. Featuring the music of Louis Jordan, The Nat Cole Trio, Dinah Washington, Big Joe Turner, Ray Charles and more, Diane and her supporting cast of world-class musicians combine high-octane musicianship and natural wit while making the audience feel they’re at a great musical party with a personal friend.
Friday, April 29 at 7:30 p.m. | All Seats $25

Wrapping up the festival is Walt Wagner, a Seattle native with a unique performance style that captures the imagination, heart, and spirit of his audience. He has performed with Jay Leno, Bill Cosby, Bob Hope, George Burns, Lily Tomlin, Roberta Flack, Sammy Davis, Jr., Bob Newhart, as pianist-conductor with Peggy Lee, and he toured internationally with Peggy Fleming in “A Concert on Ice.” Walt is well known regionally as the featured pianist at Seattle’s landmark Canlis restaurant.
Sunday, May 1 at 4 p.m. | All Seats $25

Celebrate PianoFest Northwest with a reception featuring charismatic, Seattle favorite Walt Wagner! Following his concert, Walt will be interviewed by WICA Board member and piano enthusiast Peter Morton. Complimentary hors d’oeuvres and refreshments will accompany the entertainment.
Sunday, May 1 at 6 p.m. | $25