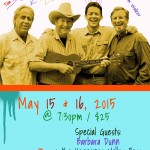 WICA presents The Rural Characters on May 15 and 16

Whidbey Island Center for the Arts presents The Rural Characters in concert at 7:30 p.m. on Friday and Saturday, May 15 and 16.

You know you love them—their music, their stories, and their hearts. But did you know that this concert raises the funds to subsidize the entire Local Artist Series? It’s true. With the proceeds of these two Rural Characters concerts, WICA is able to support and promote four local artistic groups, allowing the artists to keep all the money made from ticket sales.

So sit back, enjoy the show, and pat yourself on the back for showing true community collaboration in helping to support our local artists. Buy your ticket early; these shows sell out!

The Rural Characters began singing together in 1997, brought together in order to perform as singing cowboys for that year’s “Flip Side” of Langley. They had so much fun they have stuck together ever since. In 2003 the Characters won a spot in WICA’s Local Artist Series. That concert, “16 Chickens and a Tambourine” went so well that WICA invited them to return the next year to do a show to benefit the Series. The next year the show expanded to two nights, and then it was a tradition.

This year marks the 13th anniversary, and will feature the Characters’ favorite songs and shenanigans from over the years—with a few new numbers sprinkled in. Because it’s been so hard for the guys to choose what songs to leave out, they are giving fair warning that you should plan on being up past bedtime, and your cheeks are going to hurt.

The Characters have had many wonderful guests perform with them through the years, and wish to thank them all sincerely for their talents and support. This year’s guests will be Barbara Dunn singing with Tom Fisher, and the Heggenes Valley Boys: Joe Jeszeck, Ed Finkbohm, Russell Link and Randy Hudson—four neighbors on Heggenes Road who debuted at last year’s show and capitalized on that notoriety by landing a gig playing the Clinton Community Picnic last summer.