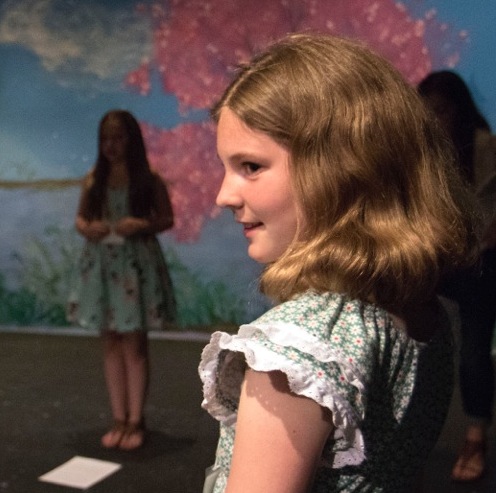 The Whidbey Island Writers Association (WIWA) has encouraged and recognized writing talent among Whidbey Island students through the ‘Celebrate Writing’ Contest’ since 1999, but this year, five nonprofit and for-profit organizations collaborated to recognize and support young writers.

After volunteer judges Jim Carroll, Mureall Hebert, Lisa Kois, Jo Meador, Helen Sears and Katie Woodzick evaluated and provided personalized feedback on each entry, Whidbey Children’s Theater (WCT) board member Carolyn Tamler tallied scores and notified winners. It was Tamler who encouraged WIWA to collaborate with WCT, where winners read their work aloud at an award ceremony on Saturday, May 30. Before the presentation, WCT staffers Michael and Kathryn Morgen coached winners in performing their work, making both the stage and microphone feel like much friendlier places.

Photographer David Welton represented Whidbey Life Magazine, the third organization to participate in this collaboration, and took the photos you see here as winners worked with Michael and Kathryn. Videographer Robbie Cribbs represented WhidbeyTV, the fourth organization, and recorded winners as they presented. Annie Horton and Mary Rose Anderson of Whidbey Air Radio represent the fifth collaborating organization; they will record winners as they read their work at the KWPA studio in Coupeville later this month.

Tulips are beautiful flowers that bloom in spring.

All they do is yield beauty in season and dance in the breeze.

They sing praises to God Almighty.

It was He who made them and they who praise Him.

When the dew sparkles and glitters on them it is like jewels.

I hear their songs of praise to God.

When they get picked, with one last breath

They hope someone has picked them for the best.

The books on the wall

But the one book that caught my eye

Was the one never checked out before

That’s how some friendships start

Once upon a time there lived a colony of eagles. The eagle’s leader lived in the tallest oak tree with his wife, his daughter, and his son.
Now his son was a little different than the other eagles. He did not like to eat rabbits and field mice like the other young eagles. He wanted to be friends with them, so he ate seeds and berries instead. He got bullied by other young eagles. He had no friends and even his own dad disliked him. The only eagle that was nice to him was his mother. His name was Tyson.
“Tyson!’’ his mother yelled, “Come and get your dinner. I have grass seeds for you!”
“May I eat up here mother, on my branch? I saw father coming and he seemed angry.”
“He won’t yell at you again, I’ll make sure of it.” Tyson’s mother said.
“Okay mother.’’ Tyson said. He flew down from the branch to the kitchen. There were chunks of squirrel and rabbit meat hanging from the roof of the nest. Tyson sighed when he saw it and tried not think about it.
Just then, his father and his sister flew into the nest. “Hello son.” Tyson’s father said sternly. “Hello father, hello Nina” Tyson said. They walked to the dining room and stood around waiting in silence for their dinner.
Tyson’s mother came in and dropped rabbit and squirrel meat in the center of the table and grass seeds by Tyson.
They began to eat. All of a sudden Tyson’s father threw a piece of rabbit meat to Tyson.
“ Oh, no thank you father.” Tyson said, picking it up with his wing and setting it back into the middle of the table.
Tyson’s father slammed his wings down on the table and said “If you don’t eat like an eagle you aren’t an eagle! And if you aren’t an eagle then you belong somewhere else!’’
“If you want me to leave, I will.’’ Tyson said, his eyes starting to get watery.
“Tyson, you must learn to be an eagle or you have to leave.’’ His father said in a stern voice.
“Then I will leave. If you don’t accept me for who I am then I don’t belong here. I will pack and go,” Tyson said, eating one last grass seed. He walked away from the dining room table in tears.
As Tyson packed a sack full of his belongings, he thought of where he was going to go. He really didn’t know, so he just flew south. He passed the Oregon border, got out of Portland and into the forest. He found a big oak tree in the middle of the forest and went in for a landing.
He immediately dropped his bag and walked around in the oak tree. There was a perfect nest space where the branches and the trunk met, and there was plenty of cavities in the branches. He cawed with happiness, as he flew from branch to branch.
Then out from nowhere, another eagle cawed back. Tyson froze and looked around the tree.
Out from one of the deeper cavities there came an eagle. The eagle had brown and black blotches all over him or her.
“Hello, my name is Tyson.’’ He smiled at the strange eagle.
“Hello, my name is Nila. What are you doing here? I live in this oak tree.” She said with frightened eyes.
“Oh, please let me stay here! My father banned me from my old colony.’’ He said in a pleading voice.
“Why did you get banned?’’ Nila asked walking towards Tyson.
“I don’t like to eat meat. I eat grass seeds and berries instead.’’ Tyson said, ready to get judged.
“No way! I do, too! I got banned from my colony for that same reason!” Nila said, excited that there was some else like her.
“Really!? Does that mean I can stay?’’ Tyson said, excited too.
“Well, I guess, but you have to get food for me. I’m not very good at flying, and I run into things.’’ Nila said blushing.
“Okay, I would be more than happy to.’’ Tyson said looking around for where he would build his nest. “Well, I’m going to start building my nest.’’
“If you need to, you can stay in my nest tonight.’’ Nila said.
“Oh, thank you Nila, but I don’t want to intrude.” As Tyson said that, it started to pour down rain.
“Or maybe I will take your offer.” Tyson said and Nila smiled
Tyson and Nila became good friends over the next week, and Tyson built his own nest and taught Nila how to fly straight. They both lived happily ever after.

Aurora Moore gets warmed up with exercises led by Kathryn and Michael Morgen from Whidbey Children’s Theater.