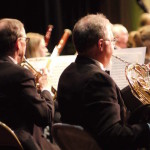 Wolf Sighting in Coupeville! Free Family Concert with the Saratoga Orchestra on Dec. 5

As we approach the darkest time of the year, an afternoon of storytelling and music may dispel the winter blues. Families are invited to the Saratoga Orchestra’s performance of “Peter and the Wolf,” a free family concert at 1 p.m. on Saturday Dec. 5 at the Coupeville High School Commons. The story of young Peter and his animal friends will be narrated by David Medley as the orchestra plays.

We might believe that Peter and the Wolf is an old folktale, but it was written in a few days’ time in 1936 by Russian composer Sergei Prokofiev and became a classic orchestral piece. Commissioned to write a symphony that Moscow children could relate to, Prokofiev created characters represented by instruments: Peter by violin or viola; Sasha the bird by flute; Sonia the duck by oboe; Ivan the cat by clarinet; Peter’s grandpapa, an old bassoon; the hunters, timpani drums; and the wolf, a French horn.

A tiled mirror depicting Peter and the characters will be raffled off during the afternoon. Roxallanne Medley, former Saratoga Orchestra concertmaster, hand-painted the tiles for the raffle item.

Her art is a labor of love to support the orchestra she belonged to from its start. When retired Los Angeles violinist Michael Nutt moved to the island in the 1990s, he and other island musicians created the Saratoga Chamber Players, which expanded—over the years—to become, in 2007, the celebrated Saratoga Orchestra

The orchestra is reprising its “Instrument Petting Zoo” that was such a hit several years ago. (photo courtesy of the Saratoga Orchestra)

Medley, who was conducting a children’s orchestra, Ceildhl Chids (pronounced Kaley Kids), was tapped to play, even though she’d sworn she was done with performing after retiring from the Seattle Symphony. Medley said she enjoyed serving as Concertmaster for eight years before she retired for health reasons, though she still plays violin privately and continues to teach music students. She added that she’ll always work somehow with the orchestra and is engaged now in fund-raising and caring for the musicians.

Saturday’s event in Coupeville will feature a special treat that the orchestra has termed an “Instrument Petting Zoo.” Orchestra musicians will demonstrate how to play various instruments and invite the public to play them as well.

A youngster tries out a French horn with the help of an orchestra member. (photo courtesy of the Saratoga Orchestra)

Larry Heidel, executive director of the orchestra and principal trombonist, said the orchestra is comprised of professional musicians who mentor half a dozen student members from South Whidbey and Oak Harbor. Heidel added that he wishes to encourage students from Coupeville to explore playing with the orchestra as well.

The concert will be conducted by Dr. Anna Edwards who, in addition to serving as the orchestra’s director, also directs the music program at Roosevelt High School.

Image at top: The French horns portray “The Wolf” in Prokofiev’s classic orchestral piece.  (photo courtesy of the Saratoga Orchestra)

Kate Poss works as a library assistant at the Langley Library. She was thrilled to work for three summers as a chef aboard a small Alaskan tour boat from 2008 to 2010. She was a newspaper reporter in Los Angeles for many years before moving to Whidbey Island where she likes “talking story” best of all.