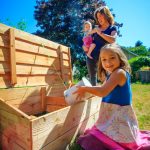 Vermicomposting: Worm-Wrangling in the Cedar

It was a perfect early-July morning – not too warm, not too cold, and bright enough to rival a brand-new dime. The sky was so blue that it would even inspire tough-as-cowhide baseball writers to use words like “cerulean.” Not to put too fine a point on it: It was a real swell day around the Bayview Farmers Market. The produce looked tasty, the craft items were clever, books by island authors looked like they were worth reading, and the silent thunder of vermicomposting went on all around us.

Zukes and cukes at a farmers market are easy to understand. Ditto for composting. But this vermi-stuff? How does it connect kitchen scraps to a bouquet of flowers?

What we’re talking about here is worms. These squiggly critters are no longer just the bait of choice for kids who “teach them to swim” on the end of a hook dangled in front of a bass or bluegill. They’re also silent partners in projects with large- and small-scale gardeners.

Fiona Hess dumps compost into a new worm bin near her home at the Fifth Street Commons while her mother Teresa and sister Simone look on. (Photo by David Welton)

They do work hard in trade for a two-room cedar home thickly carpeted with rich soil and table scraps, from truffles and tuna bones to tomatoes and toast.

In return for these lavish digs and meals, all that is asked of the red worms (the preferred breed) is their casings; OK, worm poop, if you must.

Teresa Spratt spends most Saturdays at the market, making new fans for the worm fertilizer business, talking with old friends, sharing worm stories, and discussing the finer points of the care and feeding of the tiny critters who turn table scraps and kitchen waste into black gold that grows excellent flowers and produce on the island and throughout the world.

She and her husband Todd now run their business, Bugabay, from Whidbey Island, after moving here from California’s Mother Lode foothills in Grass Valley. There, they ran a worm farm and helped build worm fertilizer operations at area schools and the county jail.

Michael Hoover and his wife Kimi have owned this worm bin for years and moved it from Port Townsend to their home at the Fifth Street Commons. The left side of the bin is now full of worm castings, and worms are beginning to migrate to the right side. (Photo by David Welton)

“We started the business here about eight years ago, but I’ve been doing composting and similar things for the past 40 years,” says Todd Spratt.“I’ve been doing this for my family and have helped educate hundreds of people on the importance of taking responsibility for our own food waste.”

The line gets a laugh, but the veteran vermicomposter is quite serious about his work in partnership with red worms. Food scraps will decompose no matter where they’re disposed, but when worms help do the job, the product they end up with is clean, rich fertilizer.

Left alone in a dump to be pushed around by heavy equipment, what food waste creates on the road to decomposition is unpleasant odors and methane gas – not only stinky but dangerous. Food waste currently makes up about a third of the waste stream buried in landfills and makes up part of our carbon footprint.

After the worms have migrated to the other side of the bin, the castings can be removed and used as fertilizer in the garden. (Photo by David Welton)

Savvy gardeners, on the other hand, whose worm partners produce more fertilizer than their gardens need, can sell the excess for a buck a pound, with a combination of rich dirt, peat moss, and the worm casings.

The worms live and work in their cedar houses (created by Spratt and displayed at the farmers market), which are the size of a small car trunk, with a top door sloping down in front and a hinge in the back. They have no bottom, so the house can be anchored to the earth, with a few inches of it buried in the ground.

Operations begin in one of the two halves of the house, where peat moss or aged manure are used to cover the food wastes. When all is ready, the worms are introduced and quickly make themselves at home, where they begin eating the food waste at what seems to be in incredible rate – about half to one-and-a-half times their body weight per day, says Spratt.

“That’s faster than any conventional composting,” he adds.

And it smells a lot better. Food scraps are kept in a tightly covered storage pot, and when they’re taken outdoors to the cedar bin, they’re covered with the aged manure bedding mixture and left for the worms to do their work.

As the first half of the box fills, the casings are harvested, and the process is repeated on the other side. The worms naturally move through openings in the center wall to begin operations in the room next door.

“Michael and I just ate our dinner, and it was made up of lettuce, carrots, beets, beet greens, cherry tomatoes, and garlic, and we had raspberries and blueberries for dessert,” says Kimi Hoover, who lives at the Fifth Street Commons in Langley, and whose worm bin inspired the acquisition of four more just like it at her intentional community. “The worm castings helped all of those things grow in our small garden. We eat mostly vegetables, and we have a lot of kitchen waste that would otherwise be thrown away.”

Hoover adds, “Without a worm bin, all that waste would’ve gone into the waste stream, and we would’ve had to buy fertilizer. This closes the loop. It’s nice not to have to throw anything out.”

Worms work fastest in summer and spring and slower during cooler months. Their speed also depends on the sorts of scrap they get.

“Mainly, we want to keep that as simple as possible,” Spratt says. “We tell people not to chop things up. It will all decompose eventually. What you feed them should be as diverse and nutritious as possible.”

Aside from giving humans a chance to trade scraps for fertilizer, the worm project gives them a truly fragrant cedar house that is pleasant to be around. The boxes are constructed from locally grown cedar, and the pieces used are small enough to be considered scrap by lumber companies.

Competitive gardeners find that the produce and flowers they grow using worm castings gives them an edge at the Whidbey Island Fair.

“Our people entering the fair do tend to take blue ribbons,” Spratt says with a smile.