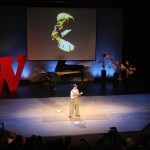 ‘WOW! Stories’ Returns to WICA for milestone fifth year on March 11 and 12

Now in its milestone fifth year, “WOW! Stories ” returns to Whidbey Island Center for the Arts on Friday, March 11 and Saturday, March 12 featuring personal stories from some of Whidbey’s most interesting and inspiring women.

Main theatre seats are now sold out. However, due to popular demand, WICA and Seriously Fun Productions, the volunteer team that produces the event each year, are pleased to announce overflow seats are now available for Zech Hall. Attendees will be able to view a live stream video of the shows on a big screen in Zech Hall (tickets $15) and participate in the event activities.

“WOW! has become one of Whidbey Island’s most popular and well-loved shows, featuring inspired talks and moving performances from the Island’s leading thinkers and doers,” said Deana Duncan, programming and production director for WICA. “It’s unique, creative, courageous, and awe-inspiring.”

Stacie Burgua, WICA’s executive director,  added, “Today’s society needs real-life heroes. Heroes who inspire us to do more, be more, and who we can relate to. I think the success of WOW! stems from discovering the heroes who are living in our own community. They are people we might know and we’d love to learn a bit more about them.”

Participating in WOW! Stories has helped many speakers and performers make sense of their rich and diverse past and has been credited as a catalyst for opening doors to new ideas and ventures. Many WOW speakers have written books since participating and have taken their speaking across the country. Betsy McGregor (class of 2012) used her WOW! talk to promote her book, “In Awe of Being Human.” Elise Miller (class of 2013) used her talk to inform a grant application for work she’s doing on the impact of environmental factors on human health. Amy Wheeler (class of 2014) credits WOW with inspiring her to write a new play, “Wake Me Up.”

Thanks to the generous contributions from WhidbeyTV, videos of past talks and performances are available online at the WOW! Stories website at www.wowstories.net.

The story behind WOW!

What started off as an idea by Diana Lindsay that “within every Whidbey Woman there’s a TED Talk,” has evolved to be become a uniquely Whidbey version of the famed TED conference. Diana had the idea that there were plenty of Women on Whidbey (WOW) who had something interesting or surprising to say. She collaborated with her friends Lynn Willeford, Rene Neff, Debora Valis and Mary Fisher, formed Seriously Fun Productions, and together they put on the first WOW! Stories as a benefit for WICA and Whidbey Island Nourishes (W.I.N) in 2012. Shannon Arndt and Heather Racicot joined the production team a year later. Now, in its fifth year, the team of energetic friends cares deeply about empowering Whidbey women to tell their stories, and above all, take fun seriously.

“I saw it as a love poem to the wonderful women of Whidbey,” Lindsay said, remembering the founding vision behind WOW! Stories. “And I think that’s why it continues on, and why we see more and more men in the audience each year!

“We are often asked ‘Won’t you eventually run out of women to invite?’ And our answer is always, ‘Are you kidding?’ There are so many women here with talent, passion and true character that we worry we won’t get to all of them before we die,” said Willeford, one of the original founding producers of the event and a speaker coach for participants.