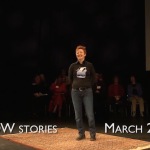 WOW! Stories Returns to WICA on March 13 & 14 for Annual Celebration of Whidbey Women

Back for its fourth year, the annual WOW! Stories has become one of Whidbey Island’s most popular and well-loved benefit shows at WICA, featuring riveting talks and moving performances from Whidbey’s most interesting and inspiring women.  New this year, WOW! Stories is offering a choice of Friday evening, March 13th; or Saturday March 14th; with a different slate of speakers and performers weaving a web of intimacy and delight at each show.

“We keep selling out each year before we even get the posters up, so we’re trying something new in 2015. We’ve split it into two shows to allow more people to come to the event,” said Lynn Willeford, one of the original founding producers of the event and a speaker coach for participants.

Presenters span six decades in age, and their interests are just as varied. Among the presenters you’ll find adventurers, artists, professors, inventors, entrepreneurs, singers, musicians, students, a farmer, a restauranteur, a “green” funeral director, a poet, a storyteller, a bodyworker, a theologian, a physical anthropologist and even an NCIS Special Agent. They will talk about their passions in life — and they won’t always be what you expect!

(Doors open 30 minutes prior to each show.)

Tickets are $25 for each show and available through the WICA box office at 221-8268 or www.wicaonline.org.You can buy for one show or both. Tickets include light fare and reception on Friday night, and a locally-made box lunch on Saturday. Snacks and refreshments will be offered for sale by Whidbey Island Nourishes (W.I.N.)

Some Langley shops, restaurants and businesses will offer specials for the WOW audience on Friday & Saturday, March 13-14. Look for the red WOW signs in participating store windows to find amazing offers.  Find more information about participating businesses from Langley Main Street Association at 221-6686.

The story behind WOW! Stories

What started off as an idea by Diana Lindsay that “within every Whidbey Woman there’s a TED Talk,” evolved to be become a uniquely Whidbey version of the famed TED conference.  Hundreds of Islanders and visitors – women and men, young and old— continue to gather for this annual benefit for WICA.

The event is produced by a volunteer team of friends who call themselves Seriously Fun Productions: Diana Lindsay, Rene Neff, Lynn Willeford, Debora Valis, Shannon Arndt and Heather Racicot. They take their name very seriously, and can be heard laughing at production meetings reciting the team motto: “We don’t do it if it isn’t fun!”

For many, the WOW! Stories promise of “stories worth sharing” calls them to attend the event year after year.Last year, it was one the fastest-selling performances in WICA’s history, selling out more than a month before the show.

WICA’s executive director Stacie Burgua adds, “Today’s society needs real-life heroes — heroes who inspire us to do more and be more, and who we can relate to. I think the success of WOW! stems from discovering the heroes who are living in our own community. They are people we might know and we’d love to learn a bit more about them.”

Don’t delay, get your tickets

A limited number of tickets is still available through the WICA box office at 221-8268 or www.wicaonline.org.

More information is available at: www.wowstories.net or at www.facebook.com/WowStories. Thanks to WhidbeyTV, videos of past presentations are available online at the WOW!Stories website.