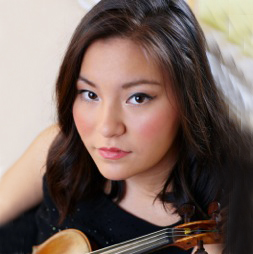 When 17-year-old violinist Mira Yamamoto knew she passed the pre-screening phase to get an actual audition at Juilliard, she buckled down.

“It’s kind of like: Well, I’ve made it this far, yay! But now the real work begins, because you actually have a chance and you really don’t want to botch it,” Mira said.

She didn’t botch it, and the young Clinton musician heads for Manhattan in August.

The Juilliard School at 60 Lincoln Center Plaza in New York City, NY is the dream of so many young performing artists, yet becomes a reality for only a choice few. Although the school also offers degrees in dance and drama, Juilliard’s renowned music division is the largest and most diverse, with about 600 students from more than 40 countries. With so many talented young artists from all over the world vying for the chance, it’s more than difficult to get into Juilliard.

But Whidbey Island made the cut.

“After the live audition, actually only about 10 to 12 violin undergrads were accepted this year,” Mira said. (She and Gloria Ferry-Brennan of Langley, with whom Mira started Suzuki Method lessons at age three and one-half, were two of those violinists.)

“I was super-touched by all of the texts, emails, and messages I got from my friends, family and teachers,” Mira added. “I received so many messages of affirmation and support on the days leading up to my audition, and every one of them helped.”

Mira’s first teacher, Linda Good, who founded the local music school, Island Strings, was one of many music teachers on South Whidbey who guided and encouraged the girls’ musical education, along with the huge embrace of the community, which has not only been able to enjoy so many of their fine performances, but which has looked on with interest and pleasure to see truly skilled artists-in-the-making.

Mira has a long and impressive resume that ranges from her first solo performance with a professional orchestra at age nine to having studied with Ronald Patterson, the widely-respected Professor of Violin at the University of Washington, and attending the renowned Heifetz International Music Institute, where she was selected to perform on NPR’s National Public Radio Series “Stars of Tomorrow” at age 16.

Good gives much of the credit to the artists’ discipline and to their parents.

“These students have been diligent and dedicated in the pursuit of learning violin and music,” Good said.

“They’ve attended group lessons, Suzuki Institutes, and have traveled around the United States to many camps to learn from the best teachers available. They both have supportive parents who took the time to practice with them, and they learned good practice habits from an early age.”

Mira, too, thinks parenting played a huge role for her, especially when she and her mom, Barbara Phillips, arrived for the audition on March 4.

It was snowing that week in New York; jets were skidding on runways and Mira avoided anxiousness by careful preparation and focus. She said her mom helped her a lot.

“My mom was a superhero to me during the whole time we were in New York because she was always upbeat and easy going,” Mira said.

“She said how excited she was that we got to have this experience at all—reminding me of what a big accomplishment it is to pass pre-screen and have the live audition—and how she was proud of me for getting us to that moment: Standing in NYC, hours away from my Juilliard audition.”

“It helps put my mind at ease and get me prepared mentally as well as physically for the audition.”

Mira was accepted at Juilliard on March 30. In August, she’ll go off to study with some of the most prestigious faculty in the music world, including internationally renowned soloists, chamber and orchestral musicians. Among them are recipients of Pulitzer Prizes, Grammy and Academy Awards, and numerous prominent fellowships.

As for her goals, Mira has set the bar high.

“I want to work hard so I can fulfill my greatest potential. And I know that’s crazy high,” says Mira.

“I want to be a musician who knows exactly what they’re doing at all times, and why. To know the history behind the music, and understand what’s going on beyond just the notes. And when I understand that, I want to convey it with such precision and emotion that the audience can’t help but be blown away,” the young musician added.

“I want to solo with every top-tier orchestra in the country, win some competitions, sign a recording contract (or a few), and after that I’d like to spread music to underserved communities—places that don’t get live music on a regular basis. I’d like to start local, and then perhaps extend that to women and children’s shelters anywhere and everywhere in the world.”

Leave a Reply to Patricia Duff